The Fives are a new creation from Klipsch, intended for anyone looking for a reasonably priced music and TV solution for the living room that sounds better than a soundbar and yet is not overly complex. The Americans do this in a very authentic and at the same time typically idiosyncratic way. Just look at the design of these active speakers: it is a big nod to the fifties and sixties, but thanks to the presence of an HDMI input, connection for a record player and Bluetooth, The Fives are also completely in line with the year 2020. Or else put, it is an original synthesis of the benefits of a soundbar and a music system. The biggest plus is that the two separate speakers from The Fives deliver real stereo. And that is a requirement if you want to listen to music in higher quality.

We looked up for a moment when unpacking Klipsch The Fives. The marketing photos gave the impression that they are a bit larger, but the Klipsch speakers turn out to be surprisingly compact in reality. The fact that they immediately look slim is probably due to the limited width. Modest dimensions in height and width are often compensated for by a greater depth with speakers, but that is not the case here. It makes it easy to place The Fives on furniture or small stands. What a contrast to the 65-inch television in our workspace, say.

You have to be a fan of it, of course, but the retro vibe is very strong with these speakers. The build quality is also excellent, especially when you take the price into account. Ok, nine hundred euros is certainly not nothing, but it is also not the ultimate price tag. And yet Klipsch provides a look that makes you never think: “Hmm, this could be better.” Compared to quite a few dedicated TV solutions and sound bars, The Fives come across as more luxurious anyway. That word ‘luxury’ was chosen deliberately, because that retro look is simply more luxurious than the austere (but not necessarily less quality) finish of most mainstream brand soundbars. Either way, The Fives’ finish is top notch, with no visible screws and barely noticeable seams. 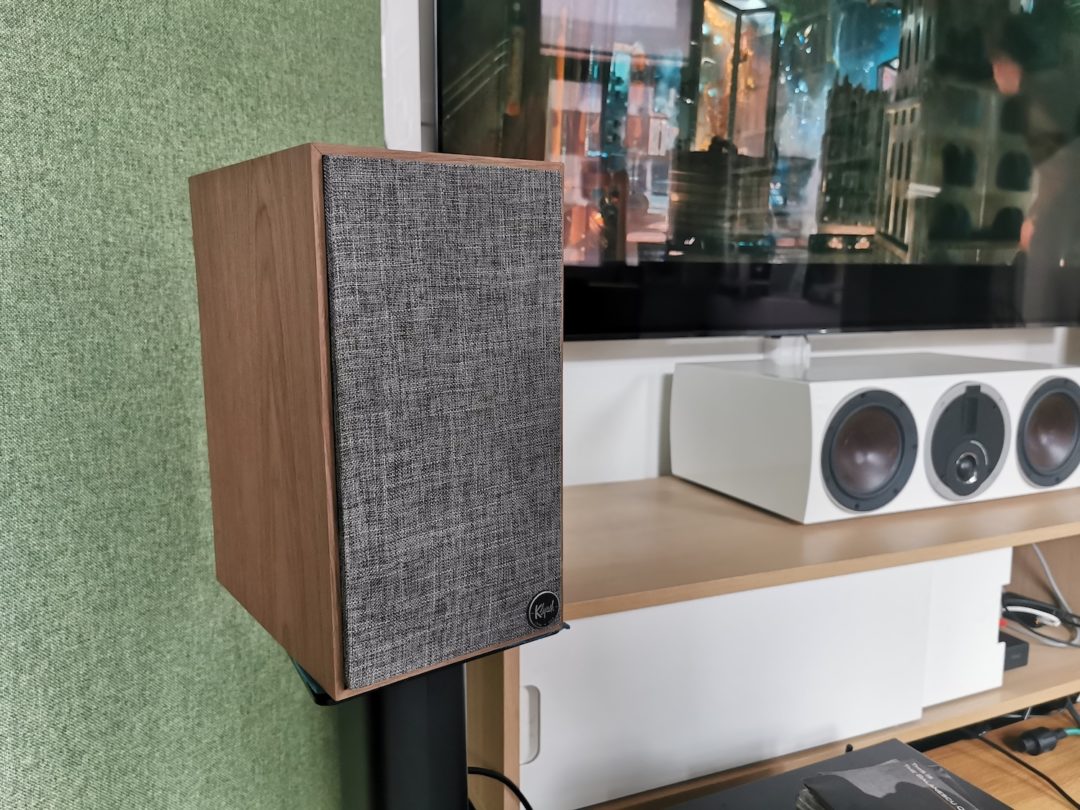 There are two color versions: walnut and black. We were visited by the first version, a beautiful edition that fits really nicely in a living room with a Scandinavian TV cabinet or retro sofa. Just like speakers of yore, the wood has been applied all around and there is a front with a rougher texture that is mounted slightly recessed. As a result, that black front panel is framed by wood, seen from the sofa, which is a classic look in hi-fi. Equally classic – especially for Klipsch – is the immense horn speaker that takes up half of the front, with a smaller woofer underneath. Take a quick look at these speakers and you will immediately believe that they are original devices from long ago. We suspect that many retro fans will get a kick out of that. For whom the view of all this seems just too busy (and we are honestly in that group) Klipsch has provided an alternative.

Nothing difficult about it

A big plus at The Fives is that you can start using them quickly. A few minutes after you free the two speakers from the box, they are ready to play. Because there are no streaming options outside of Bluetooth, you don’t have to waste time connecting to WiFi, for example. It mainly comes down to connecting cables. Which, that again depends on which devices you want to connect to these speakers. It’s not really difficult, but if you still want some explanation, a Klipsch app (iOS and Android) provides the necessary. Everything is clear in this app and illustrated with illustrations. Then you can store the smartphones, because after setting up The Fives you only need this app to make any firmware updates. 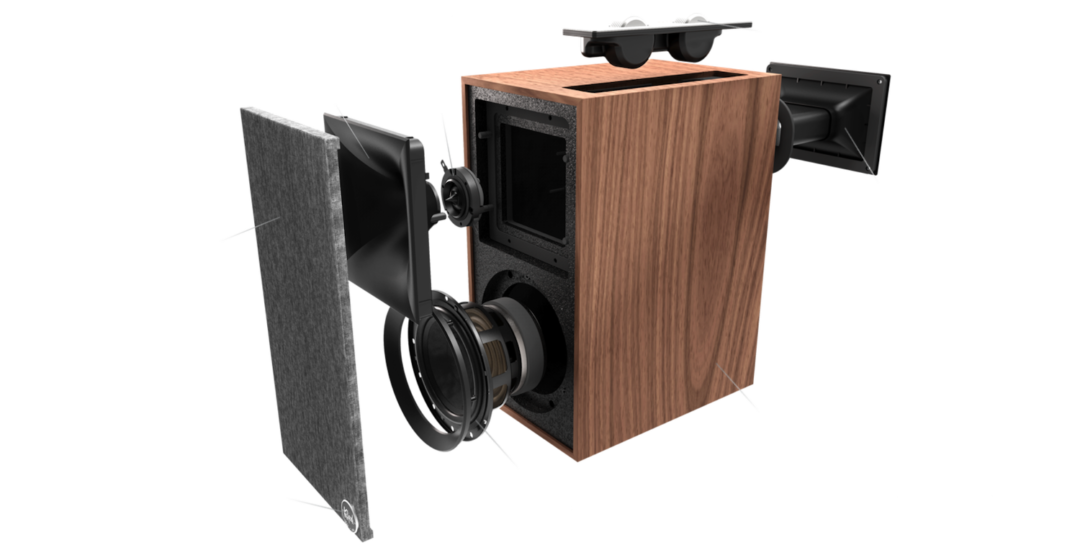 Klipsch opted for a master-slave approach at The Fives. This means that one of the two speakers is dominant and all connections and controls can be found there. A cable (supplied) departs from this primary or master speaker, which merely carries the audio signal to the second, passive device. So only one socket is needed, which is a plus in many living rooms. Don’t mess with extension cables or power strips. Fortunately, Klipsch remembered that electrical outlets are not always located where they are needed. You can indicate via a switch whether the primary speaker is on the left or right.

The included cable is approximately four meters long, which immediately indicates how far apart you can place the two speakers. It is a special cable with a kind of DIN plug with screw connection, which you cannot replace 1-2-3 with a longer one. If you are indeed using the Klipsch speakers with your TV, we would recommend placing them equidistant from the television screen. Otherwise you may experience that the TV sound does not seem to come ‘from’ the screen, which can be disturbing in dialogues, among other things. While we are still busy handing out tips: place the speakers at the same height and (ideally) halfway between the screen.

In terms of streaming, Bluetooth is your only option. That may seem limited, but it is a universal way of working. Every smartphone, tablet and laptop has it on board. You could even establish a connection to your TV via Bluetooth, for a wireless connection between speakers and television set. However, it will depend on your TV whether that can be done without visible delay on the sound. Just use the HDMI connection and it will work for sure.

The door is open for those who want more in terms of streaming. The Fives have a USB class B port to which you can connect a streamer. There are several good options in this area (such as the Volumio Primo or Project Stream Box S2 Ultra), or you can create something low-cost yourself with a Raspberry Pi (for example with RoPieee XL, with which you can use Spotify, AirPlay, DLNA and Roon compatibility). You can also connect a laptop or a smartphone to that USB Class B port, so that you can play hi-res files in high quality (up to 192 kHz / 32-bit). It may not be something that many members of the intended audience are going to do – but it can be.

Klipsch The Fives gives you a flexible audio solution that brings the fun factor to your living room
The good:

We suspect a lot of people would be satisfied with The Fives in the living room. They are handsome to begin with and excellently built, and compact enough to be easy to place. The misleading thing about the soft, formerly-it-better retro look is that you might expect a decent speaker set that colors neatly between the lines. However, The Fives are roguish, fierce and dynamic like the larger Klipsch speakers. In some smaller rooms it will take some getting used to, and you will quickly reach for the minus button at the Sub function.

For 900 euros, Klipsch The Fives gives you a flexible audio solution that not only brings the fun factor to your living room but immediately writes the word ‘fun’ in capital letters. Action film enthusiasts, gamers and anyone who loves music in which a dash of bombast is not shunned, are chiseled with The Fives.